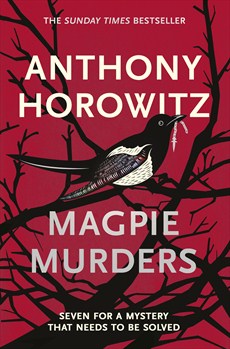 Synopsis: When editor Susan Ryeland is given the tattered manuscript of Alan Conway’s latest novel, she has little idea it will change her life. She’s worked with the revered crime writer for years and his detective, Atticus Pünd, is renowned for solving crimes in the sleepy English villages of the 1950s. As Susan knows only too well, vintage crime sells handsomely. It’s just a shame that it means dealing with an author like Alan Conway…

But Conway’s latest tale of murder at Pye Hall is not quite what it seems. Yes, there are dead bodies and a host of intriguing suspects, but hidden in the pages of the manuscript there lies another story: a tale written between the very words on the page, telling of real-life jealousy, greed, ruthless ambition and murder.

With Magpie Murders, Anthony Horowitz delivers a novel within a novel, a mystery within a mystery. The novel begins with editor of Cloverleaf Books, Susan Ryeland, sitting down to read to read the latest from her company’s most popular author, Alan Conway, the ninth book in the Atticus Pünd series. Horowitz has included the manuscript for the reader to read along with the editor, Susan.

The first chunk of the book is dedicated to this manuscript, and as such, the pages are numbered unconventionally – going backwards once Susan has read what she has of the manuscript, sans the closing chapters that reveal the conclusion to the mystery. Conway’s mystery revolves around two deaths: Mary Blakiston, and her employer, Sir Magnus Pye. As Susan Ryeland settles in to read the story, and as I did, it was not evident that Susan’s life and the mystery of the missing pages would soon come to mirror the story she was reading.

Horowitz has taken the cosy crime genre, made popular by Agatha Christie and Poirot, who rate several mentions, along with television shows the author has worked on himself, and refreshed it. An amateur detective, following the trail of clues left from a manuscript, and interactions with people involved. Slowly, and
without extensive police involvement and technology, Susan’s story reaches a climax alongside that of the closing chapters of the mystery of Alan Conway, and the final chapters of his book.

Anthony Horowitz has written a work that is meta. That is, a creative work that is self-referential. It refers to the conventions of the cosy crime genre through the story Susan Ryeland is reading and the mystery she becomes embroiled in, and in making reference to television shows Horowitz himself has worked on and the imprint, Orion, Horowitz has referenced his own world of writing and the world of publishing.

This was a book that I wanted to devour and savour at the same time – the deaths are not seen on the page, but rather mentioned, both in the Conway story and the over-arching story by Horowitz, homage to the genre conventions. As the last few pages ticked over, everything fell into place. The detail, down to reviews for the fictional series by Alan Conway at the beginning of the manuscript, to Anthony Horowitz writing as himself and as a friend of Alan Conway, all make this a worthy read of any fan of the genre, or author.

One thought on “Magpie Murders by Anthony Horowitz”