Title: The Word Detective: A Life in Words from Serendipity to Selfie 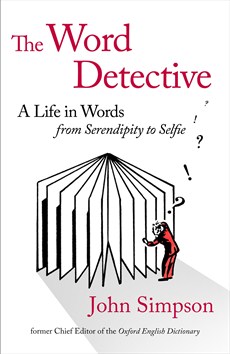 Synopsis: Language is always changing. No one knows where it is going but the best way to future-cast is to look at the past. John Simpson animates for us a tradition of researching and editing, showing us both the technical lexicography needed to understand a word, and the careful poetry needed to construct its definition. He challenges both the idea that dictionaries are definitive, and the notion that language is falling apart. With a sense of humour, an ability to laugh at bureaucracy and an inclination to question the status quo, John Simpson gives life to the colourful characters at the OED and to the English language itself. He splices his stories with entertaining and erudite diversions into the history and origin of words such as ‘kangaroo’, ‘hot-dog’, ‘pommie’, ‘bicycle’, not ignoring those swearwords often classed as ‘Anglo-Saxon’! The book will speak to anyone who uses a dictionary, ‘word people’, history lovers, students and parents.

Words are what make us human. They create societies, cultures and nations, and in turn, are also created by societies, cultures and nations. Within each of these groups, sub-groups emerge that develop their own linguistic patterns and dialects, their own words that signify membership to these groups, and that can perhaps exclude those who are not part of these groups. As humans, we are all part of different groups and sub-groups that have shared and non-shared words and language that help us identify with people we have things in common with.

As language can unite and divide us in many ways, understanding each other was a lot harder before the advent of dictionaries. One person using a word may have used it to the exclusion of others, and been smug in the knowledge that only a select few will understand. The advent of a dictionary that all could access has changed things.

Since its humble beginnings in Victorian Times, the Oxford English dictionary has endeavoured to include as many words and their origins as possible. Over the years it has evolved, and it perhaps saw a fair amount of evolution during John Simpson’s thirty-seven years there, from 1976, where he started as a reader, helping compile words to investigate and include, to his time as chief editor, when the dictionary began to enter the digital age, first being compiled on CD ROMS, and eventually, though slowly, moving towards the Internet.

The Word Detective is John Simpson’s journey with the dictionary over the years and the developments, from working out possible new words, to establishing partnerships with the US, Australia and New Zealand, and tracing origins of words from those nations for inclusion, to talks with European counterparts about finding ways to protect European languages and allow cross-cultural and international communication at the same time. Through his journey with words, John also delves into a few personal anecdotes about his family that he links to his love of language and words, and what this meant for his second daughter, who never learnt to talk. John’s high regard for words shines through, and while he marvels at some words and developments, he laments the struggle with some words of finding an origin, and the administrative side wanting to save money.

In his role as a lexicographer, John also describes the process he implemented to recruit new lexicographers, stating that a love of words would simply not be enough. His efforts to move with the times, but also keep traditional methods of working alongside the new ones made for an interesting read. How does someone who has seen so much change, and often in rapid succession over the final years of their tenure, decide how to proceed? In keeping the old and the new, John gave his team the opportunity to learn both methods, where they could use one or the other, use them together or even have a back-up with the manual system should there be a temporary technological glitch – something anyone working with computers must keep in mind.

There were a few amusing anecdotes in relation to some words and phrases. One such phrase was couch potato. Around 2000, this word was put forth for inclusion. When this happened, there was a small demonstration by the British Potato Council. They were protesting the inclusion of the phrase in the dictionary because it was derogatory to the poor potatoes who could not stand up for themselves. As John tells it, the argument was peaceful and civilised, and the whole issue died down after the company received the publicity it was after. With the inclusion of the couch potato entry, the OED settled back down into their lexicographical den.

Reading this story was intriguing and eye-opening. It opened up the world of lexicography and dictionary compilation to the reader, and made me realise that the dictionary did not just appear out of nowhere, that there has been decades, centuries even, of hard work going into compiling words – relevant and irrelevant, used and unused into a book or online resource for everyone to use when necessary. A fascinating read, especially if you are interested in the development of language.