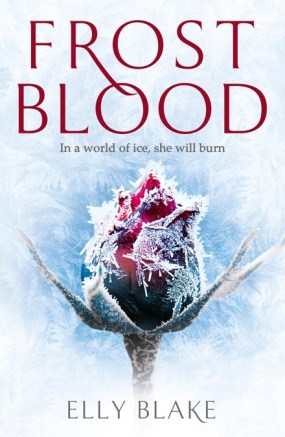 Synopsis: The first in a page-turning young adult series in a world where flame and ice are mortal enemies.

In a land governed by the cruel Frostblood ruling class, seventeen-year-old Ruby is a Fireblood who has spent most of her life hiding her ability to manipulate heat and light – until the day the soldiers come to raid her village and kill her mother. Ruby vows revenge on the tyrannous Frost King responsible for the massacre of her people.

But Ruby’s powers are unpredictable…and so are the feelings she has for Arcus, the scarred, mysterious Frostblood warrior who shares her goal to kill the Frost King, albeit for his own reasons. When Ruby is captured by the Frost King’s men, she’s taken right into the heart of the enemy. Now she only has one chance to destroy the maniacal ruler who took everything from her – and in doing so, she must unleash the powers she’s spent her whole life withholding.

FROSTBLOOD is set in world where flame and ice are mortal enemies – but together create a power that could change everything.

~*~
Ruby’s life is one of peace and quiet, but also fear. She must hide her Fireblood talent from the world because of a ruthless King, determined to continue the war that the country has been in, and who is also determined to enforce Frostblood rule over everyone. After her unpredictable powers lead to betrayal, death and imprisonment, Ruby must train to destroy the ruler everyone fears, whilst learning to control her powers. She is rescued by an order of monks and a young man, Arcus, who hides secrets as well – secrets that cannot be revealed, much like the plan the monks have devised to destroy the Frost King, King Rasmus, with the Ruby’s help. Yet there is a darkness that Ruby must fight to gain control of, and with the help of the monks, Arcus, Marella and a few other unlikely Frostblood allies, she is destined, to overcome this darkness.

Ruby’s character overcomes several obstacles on her journey that make her into a flawed and believable character, one who has the potential for good or evil, depending on the perspective of the people she is with. Her reasons for revenge against the Frost King differ to those of Arcus, however, they will find that if they combine these reasons, they will be stronger together, and be able to fight together effectively.

Elly Blake’s debut novel introduces the reader to a world where fire and ice are enemies, where prejudice is built into a class system where abilities that haven’t been asked for are either valued, or hunted down and feared. In a way this mirrors our own world, where certain characteristics and features that people have no control over are valued more than others, or denigrated in the favour of others – whether consciously or subconsciously. In Ruby’s world – Tempesia – these prejudices are ingrained and conscious – for many characters, they fear the repercussions of speaking out, or not going against the ruling class – perhaps another real world parallel that can be found in history. Old stories and rumours are used to justify actions in Blake’s world – and she has effectively shown the spectrum of the prejudice, and how people can learn to trust those whom they’ve been taught to hate, and how hate can only take a person so far – that loyalty and friendship is stronger.

I only wished we found out more about Marella, another intriguing character with shades of grey. A member of the Frostblood court, befriending a Fireblood at great risk to her life, yet still withholding some information can make for an interesting character when done right – and the set up by Elly Blake seems to have started something with great potential.

I enjoyed this debut novel and introduction to a new series – I hope that book two is not far behind, and that the adventures of Ruby and Arcus continue. In a world ruled by frost, can frost and fire ever work together? We shall have to see what the following books have in store.

A great read for fantasy lovers and readers of YA fiction. A novel with a touch of Frozen magic about it, yet a little more complex, Frostblood will hopefully become a much loved series to sit alongside Narnia and Harry Potter.

3 thoughts on “Frostblood by Elly Blake”