Title: The History of Mischief

Synopsis: ‘There is madness in it.’

Following the death of their parents, Jessie and her older sister Kay move to their grandmother’s abandoned house. One night they discover The History of Mischief hidden beneath the floor: it is like no book they have ever seen.

From Ancient Greece to war-torn China, from the Ethiopian Empire to Victorian England, the pages reveal a world of mischief and mystery, adventure and adversity – stolen bones and fiery dragons, feisty philosophers and tempestuous tyrants, shape-shifting trees and scorched scrolls.

But not everything is as it seems, in the book or in her life, and Jessie is determined to find the truth. The History has a history of its own. Unravelling its secrets might be the biggest mischief of all.

Jessie and Kay have recently lost their parents, and are living in their grandmother’s old home when thy discover a hand-written book hidden beneath the floorboards called The History of Mischief, and about someone called A. Mischief. Jessie becomes obsessed with the book and the people, places and events mentioned in it, and as she researches them, she also connects with Theodore, a kid at school who is hiding his own pain. Together, they work through the pain they’re both going through using music, origami and the book to connect. But can they navigate the traumas and difficulties they’re both going though, achieve their mischiefs. But can they uncover the greatest mystery of all – the person who wrote the mischiefs?

Before reading this book, be aware that it has themes of death and grief, as Jessie and Kay grapple with the death of their parents in a car accident. The story is told through Jessie’s eyes, interspersed with stories from the History that don’t quite add up with what Jessie reads in all the books she is borrowing – and this begins the mystery about who A. Mischief is. At first, it feels like there might be a bit of time travel or hints towards some sort of dual timeline on the surface – yet digging a little deeper, there is sure to be more to the history and what it means to the sisters.

The History of Mischief is one of those books that feels like it is going to be something else, but is something even better, that evokes a sense of family, coupled with loss and feelings of grief, and shows how different people cope with grief, and the ways it unites them but also pushes them apart. There is an ethereal and fantastical feel to this book, that evokes a sense of wonder amidst a story of grief and healing, as well as family and friendship, and the different ways we find friends in our lives.

The History of Mischief is a special story. Jessie’s narration holds some things back, but we are told what we need to know to understand her story, and the way her relationships with Kay and Theodore work. At times, one does have to read between the lines, but it is done in a way that communicates what has happened to set up the events and themes involved in the story. It is one for older, confident readers, as it is at times complex, yet it deals with grief and death in a way that everyone can relate to and come to understand. It melds history with imagination, and explores the secrets and tensions that all families share, and the role that they have played in shaping these people and who they have become and what they are willing to share with each other, or rather, in what they hold back or hide from each other – the secrets and lies, or the truths, done to protect themselves and those they love. It is ultimately a love story to family, and a recognition of past wrongs, and the conflicts of colonialism, and coming together of cultures.

This book is sad yet hopeful, and allows the characters to be angry, sad and everything in between as they learn to cope with new realities in life that they never saw coming, and never expected. This touching book is carefully and tenderly rendered, yet has a raw sense of grief that we will all feel at some stage in our lives, and in doing so, its exploration can help people find ways to cope with their own grief. 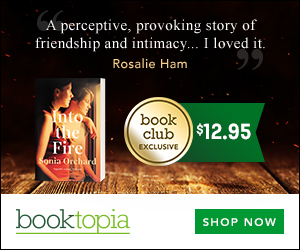 2 thoughts on “The History of Mischief by Rebecca Higgie”