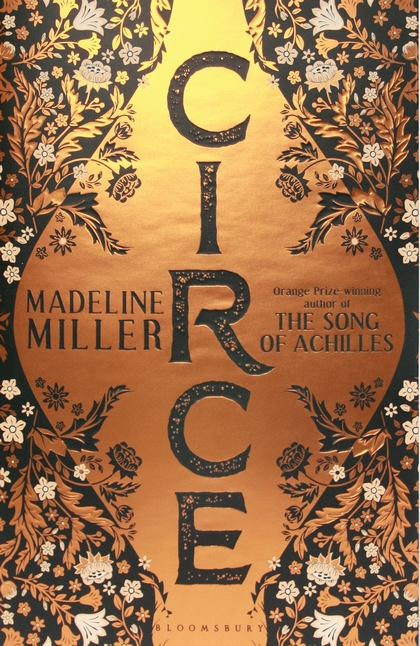 Synopsis: When I was born, the name for what I was did not exist.

Circe is the daughter of Helios, the sun god, and Perse, a beautiful naiad. Yet from the moment of her birth, she is an outsider in her father’s halls, where the laughter of gossiping gods resounds. Named after a hawk for her yellow eyes and strange voice, she is mocked by her siblings – until her beloved brother Aeëtes is born.

Yet after her sister Pasiphaë marries King Minos of Crete, Aeëtes is whisked away to rule his own island. More isolated than ever, Circe, who has never been divine enough for her family, becomes increasingly drawn to mortals – and when she meets Glaucus, a handsome young fisherman, she is captivated. Yet gods mingle with humans, and meddle with fate, at their peril.

In Circe, Madeline Miller breathes life once more into the ancient world, with the story of an outcast who overcomes scorn and banishment to transform herself into a formidable witch. Unfolding on Circe’s wild, abundant island of Aiaia, where the hillsides are aromatic with herbs, this is a magical, intoxicating epic of family rivalry, power struggles, love and loss – and a celebration of female strength in a man’s world.

Set in Ancient Greece, daughter of the sun god, Helios. and naiad, Perse, Circe is cast aside in the halls of their home as an outsider, mocked by her siblings and other gods, and named after a hawk. She is unlike anyone else, with her yellow eyes and strange voice – until her brother Aeëtes arrives, and finally, someone understands her. But still, she is isolated, as her sister, Pasiphaë marries Minos, and Aeëtes is sent away to rule his own island. So she begins meddling with mortals – Glaucus, a fisherman. When her spell backfires and he falls for her sister Scylla, the revenge she takes on Scylla sends her into an exile to Aiaia, where she traps sailors as pigs, and where one day, she meets Odysseus on his way back from Troy – a war of ten years and a journey back that has already taken several years – as told in The Odyssey. From here, Circe seals her fate as a mother and exile, and what she must endure for eternity.

The Circe (Kir-kee or Cir-cee) myth cycle is one of the most interesting myth cycles in Greek mythology. A sorceress and goddess, Circe’s most famous and well-known appearance is in The Odyssey with Odysseus when she turns his crew into swine and induces him to stay for a year on the island with her. As a witch, she used potions and magic to transform people into animals. Where most mythical retellings focus on the male heroes, Madeline Miller takes Circe’s tale and spins it into something new and fresh – Circe and what she did, her exile and how the other gods treated her and feared her – from her perspective of her role as a woman, as a goddess with the voice of a mortal but the body of a goddess and sorceress. It is Circe in her own words – what she did, what she felt when she was exiled and how she reacted to other divine figures sending their nymph daughters to her – to serve her, and in the eyes of the gods, give Circe companionship in her exile.

In Miller’s story, Circe’s dark revenge spell that she casts on her sister, Scylla, forms the backbone to this story. In a mythological world where each god, goddess and mythical figure crossover into each other’s myth cycles all the time, several other gods, goddesses and characters are woven in and out, such as Medea and Jason, seeking refuge away from Colchis, away from Aeëtes, and Pasiphaë and Minos, and the birth of the Minotaur. Madeline Miller has cleverly constructed a story that reads much like the ancient myths, but injected new life into them, amplifying the voices of the goddesses and sorceresses, and giving them a story where they are true to themselves, and where the reader goes on the emotional journey with them, never quite sure what to expect from them, or how to react to them.

Miler’s Circe is allowed to be human, though she tries to hide any instances of what the gods saw as human weakness, when it comes to her son, Telegonus, she does all she can to prevent what she fears the most. Each god and goddess show their good and bad side as well, and their ability to be heartless towards one character, yet at the same time, a patron towards another. Circe is shown as neither good nor bad, but in the grey areas in between, where many figures of mythology lie. As a lover of Greek mythology, seeing the female characters front and centre, in their own words, rather than the ancient texts, is intriguing and fascinating. Whilst still living in antiquity, modern authors give them agency and voice that ancient authors didn’t always, or that the myths didn’t allow for. The mythological world is fascinating in all its incarnations, and this latest Circe interpretation is no exception – she is feminist yet fits into her time in antiquity and uses this to her advantage, and she is individual – embracing every part of who she is because it what makes her Circe, not what Helios and the rest of her family wish she was. Circe is powerful and vulnerable in equal measure and is cautious about letting her guard down – and she is a heroine in her own right, standing up for herself and not letting the world dictate what she must do.