Synopsis: A tale of two very different sisters whose 1890s voyage from London into remote outback Australia becomes a journey of self-discovery, set against a landscape of wild beauty and savage dispossession.

London in 1891: Harriet Cameron is a talented young artist whose mother died when she was barely five. She and her beloved sister Sarah were brought up by their father, radical thinker James Cameron. After adventurer Henry Vincent arrives on the scene, the sisters’ lives are changed forever.

Sarah, the beauty of the family, marries Henry and embarks on a voyage to Australia. Harriet, intensely missing Sarah, must decide whether to help her father with his life’s work or to devote herself to painting. When James Cameron dies unexpectedly, Harriet is overwhelmed by grief. Seeking distraction, she follows Sarah to Australia, and afterwards into the outback, where she is alienated by the casual violence and great injustices of outback life.

Her rejuvenation begins with her friendship with an Aboriginal stockman and her growing love for the landscape. But this fragile happiness is soon threatened by murders at a nearby cattle station and by a menacing station hand who is seeking revenge.

Meet Sarah and Harriet Cameron – two sisters, raised by their philosopher father, until Sarah is whisked away by Henry Vincent after their marriage to the colonies of Australia during the 1890s. Harriet follows after her father’s death, and she begins to connect with the land and a young Aboriginal man, Mick. Harriet fights society’s expectations and prejudices to maintain her friendship with him, forging a connection through painting and art while Henry is away.

When a nearby cattle station is plagued by murders, this peaceful and delightful friendship is threatened by prejudice, and someone from the past bent on revenge.

Alison was one of my Isolation Publicity authors, and asked me to review her book, way back when I started. I’ve finally read it, Alison! With so many books to read and review to show support for Australian authors during the pandemic. So this year I shifted the majority of my focus on my blog to Australian authors like Alison – self-published, small press and large press. In Alison’s book, history, philosophy and feminism collide, touching on the growing suffrage movement in Australia, and ideas of racism and equality – and what this means in a world where men like Carruthers are believed over those who he hurts. It is a beautifully written novel, an ode to identity and the land, and our human connections and connections to nature, with Harriet espousing views that back in the 1890s, whilst some people agreed, it was those in power who ensured that the tolerance and acceptance was not necessarily high on the agenda.

At times, it is uncomfortable, as Alison has recreated the world and as a result, has some characters using language that these days would be unacceptable, and against anti-discrimination laws. But back then, there were no protections for Indigenous people or even women – it was a time when things were very different for everyone in society. It serves as a reminder of how far we have come since then in many ways.

It is a book that makes you think about our history, our present and our future as a nation, issues of equality and the environment, though the latter might be a little more subtle than the representation of racism. It is also a song to the land, a special recognition of what land is, and how different people see it – and what it means to the Indigenous people of Australia.

I feel like this was carefully researched and sensitively written – I felt for the Indigenous characters, for Bella, for Mick and for Daisy. The presence of Asians in the area was represented by Ah Soy – and showed that perhaps during those times some people did live harmoniously yet struggled against the widespread prejudice when others were around. I was touched by the cultural exchanges that showed how the central characters dealt with their new home and tried to put prejudices aside to form new relationships that were so powerful. This is a book that needs to be read carefully, and with consideration. It is one that I read carefully and over time, as I felt it needed attention as it dealt with things that need lots of thought. It was powerfully rendered, and one that I am pleased to have read, seeing such strong female characters in fiction who use what they know to live within the bounds of the system, whilst also making their own fate and at times, doing away with societal expectations, which is refreshing to see.

Another great book by an Aussie author! 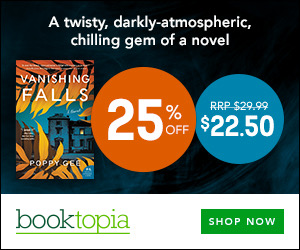 12 thoughts on “The Philosopher’s Daughters by Alison Booth”