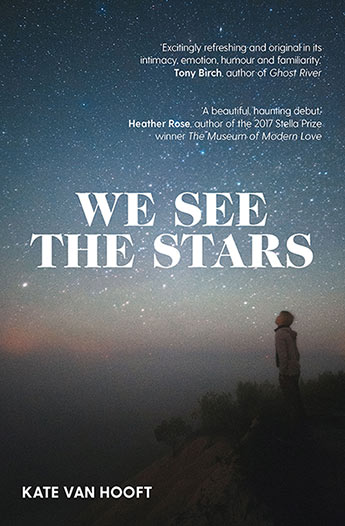 Title: We see The Stars

Synopsis:A haunting and deeply moving novel with a brilliant voice in the tradition of The Eye of the Sheep and Jasper Jones.

‘Is that the Big Dipper?’ Mum asked. Her eyes were bright from the light in them, and they shone in the darkness more than any of the stars in the sky.

Simon is an eleven-year-old boy who lives in a world of silence, lists and numbers. He hasn’t spoken for years and he doesn’t know why.

Everyone at school thinks he’s weird and his only friends in the world are his brother Davey and Superman, who’s always there when he needs him.

One day Simon shares his Vita-Weats with Cassie, the scary girl from his class, and a friendship starts to form. And the new teacher Ms Hilcombe takes an interest in him, and suddenly he has another friend as well.

When Ms Hilcombe goes missing, only Simon knows where she is. But he has made a promise to never tell, and promises can never be broken. So now Simon is the only one who can save her.

A haunting and deeply moving novel with a brilliant voice in the tradition of The Eye of the Sheep and Jasper Jones.

Simon lives in a world of silence – it has been years since he has spoken, and the reason why is a mystery to the reader, though it is hinted at throughout. Even his family don’t say outright what it is, nor do they mention what caused it – they comment on it from time to time, and his Dad and brother, Davey, are always ready to help with his puffer when his asthma gets bad. But at school, Simon is alone, and has no friends. Until his new teacher, Ms Hilcombe takes an interest in him, and does her best to understand him and work with him, and then Cassie, the girl everyone is scared of, with her mangled hand, becomes his friend. Simon also has Superman, who acts as an alter ego and gives him strength when he needs it.

Set in the 1970s, not long after the end of the Vietnam War, We See the Stars is a mystery about family and those who care for us, and about ourselves. Simon never articulates why he doesn’t talk, nor does anyone else – they hint at it being like his mother, who is referred to and seen in flashbacks, but his reason for silence and isolation is never made clear. But this makes the mystery interesting, trying to work out all the possible reasons for his silence – some of which, in the 1970s, which is when I think the book was set, were not understood in the same way they are today. So perhaps this is why the reason for his silence isn’t defined.

Simon lives with his dad, his brother, Davey and his grandmother. His grandfather is in hospital, and the door to his mother’s room is always closed, and throughout the novel, there is the mystery of where is mother is and why she is so silent – Simon hopes that she can hear his Morse code taps through the door, and waits for her to respond.

Also, as the story is filtered through Simon’s perspective, it is as though we don’t need him to define it for us, it’s his thing and he doesn’t appear to want to talk about it – not in the same way he counts colours, or makes lists of good and bad things, manages his asthma and feels the angry that comes and goes, and the honey dripping inside of him. He describes his feelings as tastes and sensations of food but within his own body – making him an interesting character. His struggling sense of self and feelings are impacted when Ms Hilcombe goes missing, and he loses one of the only adults who really understands him – Dad tries, but it is really Ms Hilcombe Simon connects with.

His friendship with Cassie, and eventually with Jeremy, is perhaps one of the most unique and genuine friendships. They know they are different, and Cassie knows communication is hard for him – and when a new teacher tries to force him to speak, it is Cassie who stands up for him, who defends her friend and in everything she does, wants to protect him from the wrath of her mother, and does all she can to understand him – as does Jeremy as the story moves along and Simon begins to speak – with Cassie, with Ms Hilcombe, and his father and brother, and at least once with his Grandmother.

Simon is an intriguing character. I’m not sure how I would define him as a narrator – maybe somewhat unreliable because we’re seeing the world through his eyes and the consequences of things that happen through his eyes, memories and imagined scenarios. The memories hint at Simon knowing where Ms Hilcombe is – it is her disappearance that forms the main mystery. Unlike other mysteries, some things are hinted at, and not explicitly defined – indicating that anything could have happened, that anyone could be responsible.

The story is moving and the ending answered a couple of questions, in a rather odd way for a first person narrative, but given the character perspective of Simon, it made sense, and fitted in with the novel. Perhaps the ending allows for the reader to imagine what happened themselves, and how it happened – a similar style of ending to Jacob’s Room by Virginia Woolf. An intriguing novel where things aren’t always clear or what they seem from a new Australian voice.

2 thoughts on “We see The Stars by Kate van Hooft”