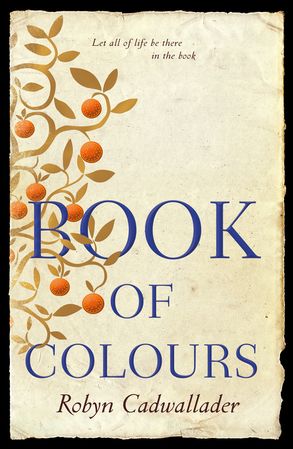 Title:  The Book of Colours

Synopsis: From Robyn Cadwallader, author of the internationally acclaimed novel The Anchoress, comes a deeply profound and moving novel of the importance of creativity and the power of connection, told through the story of the commissioning of a gorgeously decorated medieval manuscript, a Book of Hours.

London, 1321: In a small shop in Paternoster Row, three people are drawn together around the creation of a magnificent book, an illuminated manuscript of prayers, a book of hours. Even though the commission seems to answer the aspirations of each one of them, their own desires and ambitions threaten its completion. As each struggles to see the book come into being, it will change everything they have understood about their place in the world. In many ways, this is a story about power – it is also a novel about the place of women in the roiling and turbulent world of the early fourteenth century; what power they have, how they wield it, and just how temporary and conditional it is.

Rich, deep, sensuous and full of life, Book of Colours is also, most movingly, a profoundly beautiful story about creativity and connection, and our instinctive need to understand our world and communicate with others through the pages of a book.

In the fourteenth century, bookmaking was an art, a combination of trades, where a scribe or scrivener, would write the manuscript, a limner would illuminate the text, and finally, the book binder, who would bring the parchment pages together within leather bindings.  In 1321, Will Asshe is an apprentice to a small shop that creates illuminated religious texts for wealthy clients, under John, and his wife Gemma, who have their own secrets about who really decorates the manuscripts of the books of hours that Wat Scrivener delivers to them, ordered by noblemen for their families and prayer purposes. Will is an apprentice to John, and he watches Gemma as she paints and writes a book calledThe Art of Illuminationto pass down her son – each chapter begins with a section from the book Gemma is working on. As each person works on their own section in preparation for the book binder, they realise that they each have to find a way to work together and not let their own ideas of power or what the book should be take-over – it is a commission for Lady Mathilda, whose story is woven throughout the book, with her sections in 1322, when she has the book, and is sharing it with her daughters – interspersed with the intriguing and complex process that had delivered the book to her and the risks that those who created it took, with a backdrop of famine, and war that divided loyalties and affected businesses and the dealings they had with Lady Mathilda.

As the mysteries thicken and loyalties are questioned. those working on the book will find themselves questioning what they are doing and why, and what will happen if their secrets are revealed.

The Middle Ages are a period where religion was a strong, often defining force in people’s lives, and where the classes were often more defined, as were expectations of what men and women could do. As in this book, it is the male limners given the credit, though Gemma certainly had an important role to play – it is possible she represents the female limners who were never accepted into the guilds for the profession but nonetheless undertook limner work on valued manuscripts such as a book of hours.

What I enjoyed about this book was the way the book of hours being created for Lady Mathilda reflected the personalities of Will, Wat and Gemma, and John – whose contributions to the book and hushed secrets about its creation and why things happened as they did have to be kept for as long as possible from Southflete, the head of the guild, and the worry of what would happen if he found out. The plot and the characters flowed together effectively and the power that they each exercised – not just over the book and their duties, but over each other, and family.

I also enjoyed the prominence of the role of women – Lady Mathilda as a noblewoman, and Gemma as a wife, mother and limner, who had been taught to paint and read by her father as a child. The power these women have is temporary and can be taken away in an instant, but when they have power, they hold onto it and yield it to garner the best outcomes for themselves, their duties and their families. At the same time, they use the power within the confines of their time and place, and to their advantage, whilst maintaining the subordinate position expected of them by those around them.

Throughout the book, the characters are linked by the creativity they exhibit – through words, through painting and through using the pictures to tell a story if they can’t read, and the marginalia that decorated the book alongside the larger, religious images, and the communication of ideas through an image that to all but those in the know, might not understand the meaning behind it.

Overall, it is a book of creativity and mystery, set against a backdrop of uncertainty for all, and where a manuscript such as the one created in this book had immense value and hid the secrets of its creators and those who ordered it.

An interesting book for those who enjoy stories about power and history, and where the relationships weave in and out of the story, but don’t define every aspect of it.

1 thought on “The Book of Colours by Robyn Cadwallader”