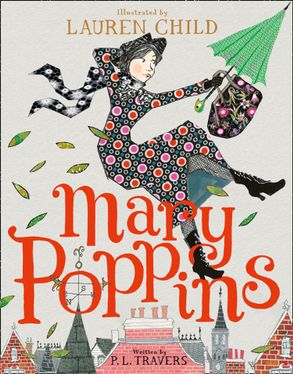 Who better to reimagine this endearing children’s classic than today’s most instantly recognisable and best-loved artist-illustrator? Lauren Child brings the magic of Mary Poppins into the hearts and imagination of readers and fans new and old.

First published in 1964, Mary Poppins has been delighting readers ever since, both in books and on film. This stunning deluxe edition is published ahead of the release of the hotly anticipated Disney film Mary Poppins Returns.

In 1934, Australian author, P.L. Travers, a pen name for Helen Goff, wrote and published Mary Poppins, the first in a series of books about a magical nanny who looked after the Banks children, Jane, Michael, and their twin brother and sister, Barbara and John (Barbara and John do not appear in the 1964 Disney movie). In this edition, Lauren Childs has illustrated the stories told by P.L. Travers, and the world she created in London, and Number Seventeen Cherry Tree Lane, which is an address that is familiar to many through the books, and the movie, and that has captured the imaginations of children and adults for generations.

When Katie Nanna up and leaves the Banks family at the beginning of the book, Mary Poppins appears out of nowhere to take charge, flying in on the East Wind on her parrot-handled umbrella and with her magical carpet bag. Throughout, she goes on adventures with Bert, the Match Man, and takes her charges, Jane and Michael on outings, and shares the secrets of talking to animals with the twins. She has promised to stay until the wind changes to the west – at which point, her work will be done and she will have to depart the Banks family.

The latest edition has come out in anticipation of the upcoming movie, Mary Poppins Returns, which sees Mary Poppins, this time played by Emily Blunt, return to Cherry Tree Lane, to a new generation of Banks children. The story is simple, but at the same time, filled with a sense of reality, where a family must learn to be a family again, and this is done through the magic of Mary Poppins – though in the book, she is much less saccharine than in the Disney version. Here, we have a Mary Poppins who does not shy away from the realities that the Banks children do and must face in the world that is about to become quite dangerous.

The world that P.L. Travers creates is set in London, referred to as the City, and landmarked by St Paul’s Cathedral, where we meet The Bird Lady – who has a bigger role in the novel than the film, and even though this is an abridged version, it still gets the main ideas and story across, and people can enjoy this and the original together now, as each publication, both movies and the stage show bring a new level and new layers of story to Mary Poppins and what she does for the family.

The story is set in the early twentieth century, though Lauren imagined it in the 1930s – perhaps it could be either, and at the start, it reads like it could possibly be set in early twentieth century Australia until those classic London landmarks are mentioned to cement the setting. It is a delightful edition, and the illustrations are whimsical and fun, but still capturing the essence of the original story that P.L. Travers intended for her characters. It is an Australian classic that has endured for over eighty years, and will hopefully, continue to charm readers for years to come, both child and adult.

I enjoyed reading this book, and hope that others enjoy it too.