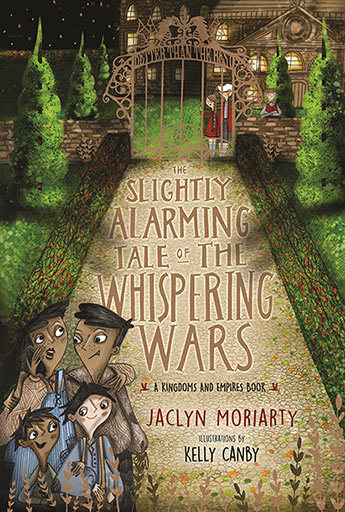 Title: The Slightly Alarming Tale of the Whispering Wars

Synopsis:An enchanting and whimsical spell-filled fantasy novel from Jaclyn Moriarty, the highly-acclaimed author of The Extremely Inconvenient Adventures of Bronte Mettlestone and the award-winning author of Feeling Sorry for Celia and A Corner of White, suitable for readers who loved A Most Magical Girl

I was taken by Whisperers at 2pm, so I never pulled the lever for the laundry chute.
That’s what bothered me most.
This is way ahead in the story, though. A lot happened before that.

The town of Spindrift is frequented by pirates, Shadow Mages and charlatans. It’s also home to the Orphanage School, where Finlay lives with Glim, Taya and Eli. Just outside town is the painfully posh Brathelthwaite Boarding School, home to Honey Bee, Hamish and Victor, Duke of Ainsley. When the two schools compete at the Spindrift Tournament, stakes are high, tensions are higher, and some people are out to win at any cost. Before long, the orphans and the boarding school are in an all-out war.

And then Whispering Wars break out, and Spindrift is thrust onto the front lines. Children are being stolen, Witches, Sirens and a deadly magical flu invade the town, and all attempts to fight back are met with defeat.

Finlay, Honey Bee and their friends must join forces to outwit the encroaching forces of darkness, rescue the stolen children, and turn the tide of the war. But how can one bickering troupe outwit the insidious power of the Whisperers? And who are the two mysterious figures watching them from the shadows?

The Slightly Alarming Tale of the Whispering Wars is the next in the Kingdoms and Empires series, that began with Bronte Mettlestone and her rather inconvenient adventures to visit aunts and hand out gifts to them, where she meets up with Alejandro and other friends – that is her story, and in the second book, we have two delightful and enthusiastic narrators – Finlay, from the Orphanage School, and Honey Bee, from the Brathelwaite Boarding School, a rather painfully posh school on the edge of town, and when the book opens, Finlay and Honey Bee are at each other’s throats, and their schools are neck and neck in a local sports competition – a competition that the Brathelwaite students desperately have to win if they do not want to incur the wrath of their headmaster – who is rather questionable and I sincerely didn’t trust him from the get-go. As time goes on though, both Finlay and Honey Bee – who alternate chapters and actually get to know each other – relate to the reader the rivalry between their schools, and the strange goings on in spindrift – children are disappearing, and each school thinks two mysterious children who keep popping in and out of Spindrift are from the respective schools, spying on the opposing school – but is this the case, or are they another entity entirely?

Eventually, Finlay and Honey Bee realise that they must work together 0 and their friends must work with them and each other to uncover the truth about what has been happening with the help of two mysterious visitors who know more than they are letting on – visitors that readers of the previous book will recognise and enjoy seeing again. The Whisperers are back, as are the tales of Spellbinders and Witches and faery magic – and a set of twins – intelligent, smart and cheeky – to rival Fred and George Weasley – the latter of which would probably take Eli and Taya under their wing should the worlds meet, and the mischief caused would be wonderfully catastrophic, as well as dragons – my favourite final chapter line is “And that’s when the first dragon landed.” What a way to end a chapter! Alone, all these elements are effective – but together, they create an atmosphere of humour and mystery that is delightful and exquisite in its execution, and is an exciting plot, driven by magic of all kinds that weaves its way around the words and spellbinds the reader. As I read in, the surprises kept coming, and I was cheering for Finlay and Honey Bee, glad that they finally managed to get along, though their arguing made the story extremely amusing and brought a lovely sense of humour to the book, as did the way they broke the fourth wall, and spoke directly to the reader, and admonished each other for misleading or not telling the reader something – an excellent addition!

This series is shaping up to be spectacular one, and is yet another example of the fine, well-honed talent we have coming out of Australia, especially with our women writers, whose stories are often diverse, and cross a myriad of experiences and genres in both fiction and non-fiction, and this is only growing each year as we have more and more enthusiastic and wonderful talent entering the scene. A wonderful follow up, and hopefully, with many more to come.