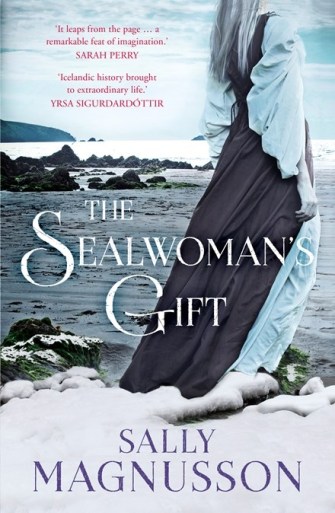 Synopsis: A woman’s story lost from history – in 1627 Icelandic islanders were abducted and sold into slavery in Algiers; but what happened to the women and children and, specifically, to the pastor’s wife?

‘A remarkable feat of imagination… I enjoyed and admired it in equal measure’ Sarah Perry, author of THE ESSEX SERPENT

In 1627 Barbary pirates raided the coast of Iceland and abducted some 400 of its people, including 250 from a tiny island off the mainland. Among the captives sold into slavery in Algiers were the island pastor, his wife and their three children. Although the raid itself is well documented, little is known about what happened to the women and children afterwards. It was a time when women everywhere were largely silent.

In this brilliant reimagining, Sally Magnusson gives a voice to Ásta, the pastor’s wife. Enslaved in an alien Arab culture Ásta meets the loss of both her freedom and her children with the one thing she has brought from home: the stories in her head. Steeped in the sagas and folk tales of her northern homeland, she finds herself experiencing not just the separations and agonies of captivity, but the reassessments that come in any age when intelligent eyes are opened to other lives, other cultures and other kinds of loving.

THE SEALWOMAN’S GIFT is about the eternal power of storytelling to help us survive. The novel is full of stories – Icelandic ones told to fend off a slave-owner’s advances, Arabian ones to help an old man die. And there are others, too: the stories we tell ourselves to protect our minds from what cannot otherwise be borne, the stories we need to make us happy.

‘Icelandic history has been brought to extraordinary life... An accomplished and intelligent novel’ Yrsa Siguroardottir, author of WHY DID YOU LIE?

1627, Iceland. A remote island is ravaged by Barbary pirates, and 400 Icelanders were taken captive, and transported to Algiers, at the time part of the Ottoman Empire, to be sold into slavery to sultans and council members and their families, and into harems or to whomever can pay the right price. Families are ripped apart, children taken from their parents. Many die in the coming days and weeks from fevers and diseases they’ve been isolated from on their island. Ásta is separated from her eldest. Egill, and her husband, Ólafur, and it will be almost a decade before she is reunited with her husband. Her younger children, Marta and Jón are able to stay with her – though the slave master’s whims must be met swiftly, and without questioning. As Ásta and her fellow enslaved Icelanders await a ransom payment, they do their best, and what they can to survive. Ásta finds solace in the Icelandic sagas she heard as a child, and eventually, the tales of Scheherazade and the Arabian nights. Time passes, and she begins to question where she came from, and who she is as she uses the Icelandic sagas to tame her master and calm herself. hoping one day for freedom, a freedom that could come with a price she may never forgive herself for paying.

The clash of Icelandic and Arabic culture and religion are a shock to Ásta, who watches as the other enslaved women who survived the journey and initial few days and weeks take on their new culture to fit in and survive, and as her children take on the religion of the enslavers and have their entire identity reshaped. It is a story about slavery, yes. It takes an instance of slavery that I had previously not known about. The image most people have of slavery is linked to colonisation, and The American Civil War – but there are many stories of slavery, of the worldwide slave trade that are not always spoken about. Like other slave masters, Cilleby tries to justify the actions of the Barbary pirates by saying it had been done to other groups before, suggesting that throughout human history, all groups at one stage or another have tried to enslave each other for their own purposes and power. I found this to be quite interesting, and it embarked on a journey for Ásta of survival and love for her children, and a longing to be home. It speaks to the pain of being ripped away from all you know, from home and family, and displaced in an alien world that does not feel so welcoming to you. The raw feelings of Ásta’s isolation come through explicitly and clearly for the reader, as does her horror at the way the other women she came over with so willingly take to the life they’ve been forced into, take to marrying those who buy them and converting to Islam because it means freedom from being a slave – her horror at turning her back on her own religion and her own family is apparent, and is executed effectively.

Whilst the history of the enslaved Icelander’s becomes the backbone to this story, at the heart is the role of women and their voices, lost in the original sources. Ásta’s name is found in a record of the ransom, but not referred to in the Travels of Reverend Ólafur Egillsson: Captured by Barbary Pirates in 1627, and its translation that the author has referred to. Using the sources available to her and a little creative licence based on these sources, Sally Magnusson has raised Ásta’s voice, and made her the primary story teller through, dipping in and out of other perspectives of the slave owners and Ólafur to tell a well-rounded story about the times and the complexities of human nature. Through Ásta, the life of a slave is revealed, though it is the life of a female slave, unable to participate in certain areas. The trepidation and fear she feels in her new life reverberates throughout, and as she loses herself and loses hope in her own faith and family is eloquently dealt with, and sensitively shown. Each element of the story has been carefully thought out, researched and written to give scope to each of the characters, and reveal their flaws and their positives. They are human, and they show human emotions and are subject to how they feel at the time, and not how people tell them to act or feel. I found this to be very effective and it ensured a story with a decent pace. The settings of Iceland and Algiers are excellent contrasts, the cold and hot, the barren and the lively, and the feeling of home and the different ways each are a home to the characters. Though it shows very strict gender roles. Ásta’s attempts to move out of what is demanded of her but at the same time, use it to her advantage, were written with great detail and interest.

Understanding that slavery has many layers and has affected many countries at different times is something that this book highlights, using an example not often heard about. In the author’s note, Sally mentions that slave trade as happening all over the world at the time of the 1627 raid on the coast of Iceland, that it wasn’t an isolated incident. Telling the diverse stories of slaves and the slave trade shows how vast it was across the entire world, not just the stories and histories we hear about and are taught.

I found it hard to find a favourite part as each section was all so different and each had something I enjoyed about it, though Ásta’s chapters were ones I always looked forward to, and what she did in circumstances she had no control over. It was a great story, and one that shows a different side to the history of slavery and the power of traditional stories and storytelling.

1 thought on “The Sealwoman’s Gift by Sally Magnusson”