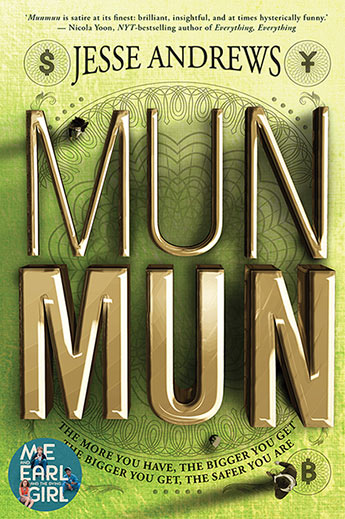 Synopsis: A pointed, amusing and highly-original story set in an alternate reality wherein every person’s physical size is directly proportional to their wealth, by the best-selling author of Me and Earl and the Dying Girl.

In an alternate reality a lot like our world, every person’s physical size is directly proportional to their wealth. The poorest of the poor are the size of rats, and billionaires are the size of skyscrapers. Warner and his sister Prayer are destitute – and tiny. Their size is not just demeaning, but dangerous: day and night they face mortal dangers that bigger richer people don’t ever have to think about, from being mauled by cats to their house getting stepped on. There are no cars or phones built small enough for them, or schools or hospitals, for that matter – there’s no point, when no one that little has any purchasing power, and when salaried doctors and teachers would never fit in buildings so small.

Warner and Prayer know their only hope is to scale up, but how can two littlepoors survive in a world built against them?

From the bestselling author of Me and Earl and the Dying Girl comes a brilliant, warm, skewering social novel for our times in the tradition of Great Expectations, 1984 and Invisible Man.

Munmun is a satirical, tongue in cheek story about wealth, and the privileges that come with it. As littlepoors – the smallest on the scale of wealth, Warner and his sister (consistently referred to as sis throughout). Prayer, have no power. They’ve got no way of working their way to a higher scale. But when an opportunity arises for them to leave where they have lived their whole lives, and start a journey to scale up, they take the chance, and traverse the strange country that is the Yewess, with places with names like Wet Almanac, and two different worlds – LifeandDeath World – Day and Dreamworld -Night. It is a world where wealth, education and opportunity is proportionate to size, an alternate world much like our own, but also a bit of a dystopia, where no matter how much some people have, it will never be enough, mirroring some of the attitudes in the world today, and where the bigrich look down on the littlepoors for not trying harder, even though those higher up on the scale don’t try to help them, but rather, blame them for the situation life has put them in.

it is narrated by Warner, and we see the world of each scale level through his eyes, from the littlepoor to the highest rich scale and beyond – and his journey to getting Scaled Up so he can make something of himself, but he thwarts every opportunity those in the middle present him with – or so it seems, on his quest to better the lives of those like him.

At times reading this, I wondered where the story was, and where the character growth – other than physically Scaling Up was. The mashed together words and the way Warner spoke worked at first, but once everyone, even those who had more education in the book than him did it, I began to wonder if that was the way Warner heard them, or whether the entire fictional nation spoke like that. For Warner, it worked, as it was him telling the story – though having everyone else speak exactly like him left little room for character growth and development, which would have added to the novel – which has the promise of being amusing whilst still being an allegory for the greed in the world today.

It is definitely a satirical allegory of society today – and that aspect worked really well, showing how greed affects people and what some people are willing to do to have it all, and the lengths they will go to. I did find the consistently mashed together words distracting if I put the book down, so I read whole chunks in a single sitting because that ensured the flow of the way the characters spoke and spoke about their world – putting it aside meant I needed a few pages to get used to it again, however, I feel for the purposes of the satire, it has worked – even the misspellings worked and were mostly understandable, as most of them were related to cities or countries, and it was as though we were reading Warner’s thought patterns and the way he understood spoken words as opposed to written words.

At times, the mashed together words worked, and at times, they didn’t – perhaps allowing other characters to not do this would also have been an effective way to show the differences in speech patterns for classes in society.

Overall, it was a rather strange book, not quite what I usually read. The premise is interesting, and the plot seemed to be rushed in places, especially the end. Whether this was intentional or not, I’m not sure – but in a way it worked because whilst the first few parts related Warner’s struggles, the last part was focussed on how munmun had made him greedy – and the implications of this in a society where it’s okay to Scale Up, but shh, don’t Scale Up too much, that’s too greedy, which felt reminiscent of some of the things said today by politicians, which is why this works as a political allegory because it shows there is no perfect life and no perfect ending, which for a dystopian novel that also reads as a satirical allegory, works well.

It’s marketed towards the higher end of the YA market, and can be a little dark. Not my favourite read of the year, however it is an interesting one that might provoke some interesting discussions.

1 thought on “Munmun by Jesse Andrews”