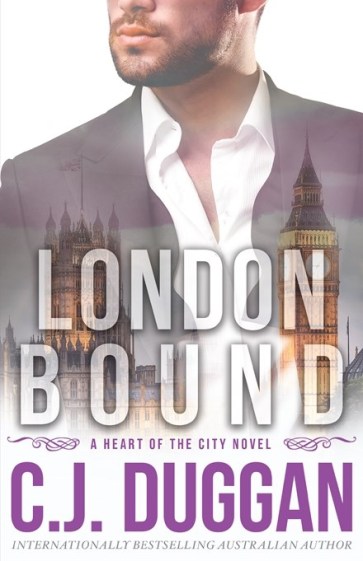 Synopsis: Like so many of her university friends, Kate Brown is London bound, but unlike her friends – who had the chance to enjoy the beer, sights and attractions of the UK – Kate is instead visiting her grandmother (who may or may not be the devil).

Wanting nothing more than to be a normal, independent twenty-something living it up in ol’ London town, Kate finds herself a prisoner in her grandmother’s Kensington terrace, daydreaming about the holiday that could have been. But when Kate is almost run over by the ridiculously good looking Jack Baker, it leaves her wondering if being out and about is such a good idea after all, especially when she catches herself laughing at his jokes.

One thing Kate knows for sure is that she has to avoid Jack at all costs. But with her balcony facing his, you can pretty much guarantee Kate’s London adventure is going to be anything but boring . . .

Novels that centre on a romance aren’t usually what I enjoy reading, but C.J. Duggan has managed to balance the romance aspect with character and plot development well. In London Bound, Kate Brown has moved to London to experience the city for herself, and work on her blog. Living with her grandmother, who seems to be the devil incarnate to Kate, she has several encounters with neighbour, Jack, who holds back much of his life as he gets to know her. When Kate stumbles across her grandmother’s secret room, she is inspired and begins to flesh out her blog, showing it to Jack and watching it grow. Inevitably, a romance develops and they hit a rocky moment, that is quickly resolved, and like many romance novels, results in a happy ending.

Whilst the romance factor in this book didn’t capture my interest, it was the London setting and Kate the writer that made the book enjoyable for me, even though I could guess how things would be resolved at the end. Jack was a more interesting character than I anticipated, and he was rather entertaining in the bar and at other moments, and during his interactions with Nana Joy.I found that each character had their own growth within the story – whether it was realising something about themselves or other people, or a combination of both, and to me, that made it more than just a romance, it had a romantic love but also a familial connection and love and a friendship.

Kate and Jack’s romance and subsequent relationship didn’t happen as soon as they met, or as soon as the novel began. Instead, it slowly developed along with the plot and Kate’s

blogging plans, and her desire to see more of London than the rooms she occupied.

The refreshing thing about this book was the meat to the plot and characters. The mysterious male figure was a bit of a trope but at least Jack had a pleasant side, which made him likeable. I’m still not a total fan but it was an enjoyable and quick read, and suited for fans of the author and genre.