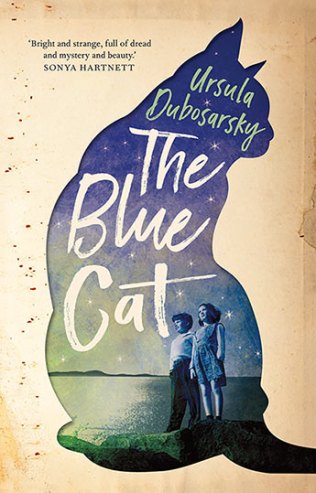 Synopsis: From the multi-award-winning author of The Red Shoe comes a haunting story about a boy who can’t – or won’t – speak about his past in war-torn Europe, and his friendship with a young Australian girl.

A boy stood in the playground under the big fig tree. ‘He can’t speak English,’ the children whispered.

Sydney, 1942. The war is coming to Australia – not only with the threat of bombardment, but also the arrival of refugees from Europe. Dreamy Columba’s world is growing larger. She is drawn to Ellery, the little boy from far away, and, together with her highly practical best friend Hilda, the three children embark on an adventure through the harbour-side streets – a journey of discovery and terror, in pursuit of the mysterious blue cat …

The Blue Cat by Ursula Dubosarsky is a glimpse into a world affected by war through the eyes of children. The main character, Columba, is a dreamy, curious child, who notices the strange boy, Ellery at school during the early part of 1942. A blue cat, sleek and mysterious, has appeared at her neighbour’s house. The arrival of Ellery and the cat spark a curiosity in Columba that has her asking more questions, wanting to know more about the world as she tries to become Ellery’s friend. Columba’s friend, Hilda, is the realist, the pushy one out collecting money for the war effort, and isn’t as dreamy as Columba.

Ellery’s arrival hints that war is closer to home than everyone thought. He is mysterious and quiet, and doesn’t speak English – through the eyes of a child, he is strange, a mystery and yet, someone that Columba sees is in need of a friend. Though they do not talk, they become friends, something Ellery’s father finds pleasing for his son, lost in a new world without a mother. The story culminates in a search for the mysterious blue cat, and events that bring the war and the realities of what that means closer to home for Columba.

The Blue Cat is dreamy, and has a fairy tale feeling about it – as though the blue cat is not quite real. This fits with the dreamy sense I got from Columba, and also the childlike ways of understanding the war – You-Rope for Europe, said phonetically perhaps, as a child might say it. I found there was a sense of magic about it – the threat is real, especially during the air raid siren practice when Columba and Ellery are out walking, and yet, it retains some of the innocence of childhood, though it is scarred by a war that is so far away yet in other ways, so close to the characters.

The Blue Cat combines history with a sense of dreaming, placing the characters in a world where sometimes their imaginations help to get them through the day, but at the same time, the reality of war will always be there. Prisoners of war, bombs and people like Ellery, hiding away, hoping for safety away from the dangers of a nation far away. Throughout the book, Ursula Dubosarsky incorporated primary sources from the time period, which added to the reading experience and gave Columba’s story an authentic feel, and added to the gravity of the situation and reality that the characters were living. An enjoyable novel showing war through the eyes of a child, and a good read for children aged ten and over.

5 thoughts on “The Blue Cat by Ursula Dubosarsky”