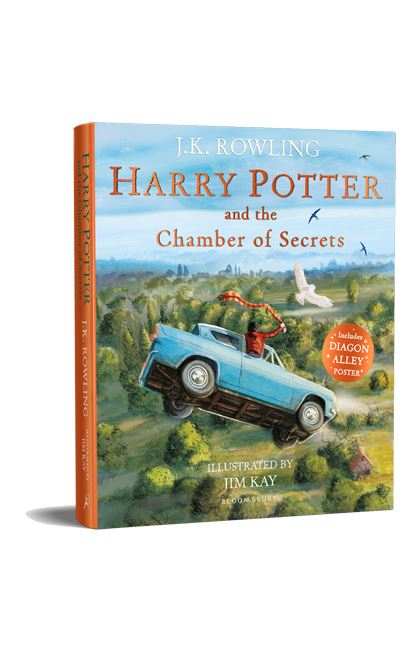 Title: Harry Potter and the Chamber of Secrets Illustrated Edition

Synopsis:Jim Kay’s dazzling depiction of J.K. Rowling’s wizarding world has won legions of fans since the first Illustrated Edition of the Harry Potter novels was published in hardback in 2015, becoming a bestseller around the world. This irresistible smaller-format paperback edition of Harry Potter and the Chamber of Secrets perfectly pairs J.K. Rowling’s storytelling genius with the enchantment of Jim Kay’s illustrations, bringing the magic of Harry Potter to new readers with full-colour pictures and a handsome poster pull-out at the back of the book. This edition has been beautifully redesigned with selected illustration highlights – the fully illustrated edition is still available in hardback.

Fizzing with magic and brimming with humour, this inspired reimagining will captivate wizards and Muggles alike, as Harry and his friends, now in their second year at Hogwarts School of Witchcraft and Wizardry, seek out a legendary chamber and the deadly secret that lies at its heart.

About two years ago, the illustrated edition of Harry Potter and the Chamber of Secrets came out in hardcover, with delightful illustrations throughout each page, evoking a sense of Harry’s world beyond the movies and text only or audiobooks. This year, Bloomsbury are releasing a paperback edition – with 60% of the illustrations in a smaller edition.

Many of us know the story from the Chamber of Secrets well – whether we read, watched or listened to it, or a combination of all three. In this book, Harry is set to return for his second year at Hogwarts, despite his horrid aunt and uncle trying to stop him. Yet his return is almost thwarted by Dobby the House Elf, who is keen to protect Harry from dark things happening at Hogwarts – dark things we later learn are linked to the titular Chamber of Secrets, and as students are attacked, the history of the school, and other secrets are revealed.

Jim Kay’s illustrations capture the magic and wonder of Hogwarts, and bring the characters to life in a new way, with full page images of some characters, like Draco Malfoy and Rubeus Hagrid, showing stark differences in their personalities: a smug-looking Draco Malfoy versus a sad, unsure Hagrid, illustrating the sense of entitlement Malfoy has, especially in the early books, versus the true heroes like Hagrid.

I am eager to peruse the hardcover edition again, as there were some things I missed from there in terms of the illustrations. Some of the best are of Dobby, whose presence in this story is one of fun, and at times, worry – but Dobby is only trying to help, in his own way, and the images of him doing this or after he has done this are amongst my favourites, and I will revisit them.

1 thought on “Harry Potter and the Chamber of Secrets Illustrated Edition by J.K Rowling, Illustrated by Jim Kay”