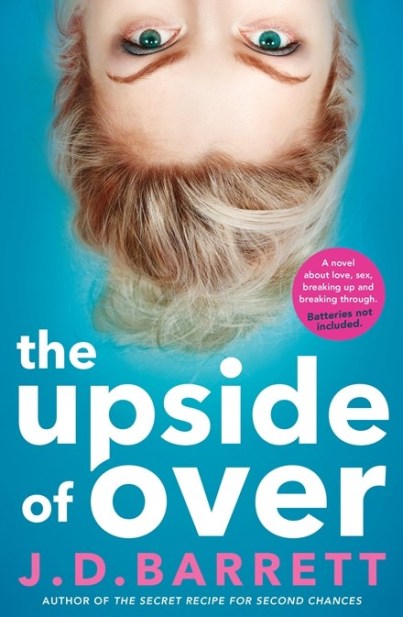 Hi J.D., and welcome to my blog, The Book Muse.

Congratulations on publishing your third book, The Upside of Over. I read The Song Of Us as well last year as part of the Australian Women Writer’s Challenge, and I thoroughly enjoyed both.  Thank you so much, Ashleigh!

Of all the books you have written, which one has been the most enjoyable to write?

They’re all enjoyable in different ways – The Secret Recipe for Second Chances will always be special, it was a life raft in many ways… The Song of Us and The Upside of Over had also been digging into my subconscious for years. Each of them is unique and took me on a very different journey! The Upside of Over certainly gave me a lot of joy as I wrote it… I had to keep pushing myself to stay brave and sass it up!

Olivia is an intriguing character, filled with flaws but also, I thought with a lot of self-confidence – during your time working in television and media, did you find this was a common trait of the people you worked with?

Absolutely! I mean as humans we are flawed and all loveable in our fallibility. I think if you’re working in an arena where presentation is everything it can be even more challenging and confronting when failure strikes. I also can see how easy it can be to become your persona.

The experiences that Olivia went through following her personal video to her husband going viral felt raw and genuine – do you think these are common experiences for women in the media industry?

I think anyone who has experienced the breakdown of a marriage, a long-term relationship, sudden unemployment or the loss of a loved one knows what it feels like to be completely stripped bare. All those things you thought were important no longer matter, the way you sorted your life goes out the window and you’re on the coal face of what really matters and what’s left when all those comforts and distractions go. Getting to a place where you can love and accept yourself in that and reinvent from an authentic place is (I feel) one of our biggest lessons as humans.

Being as expansive as you like, and using your own knowledge and experiences, why do you think women in the media have these experiences and what do you think this does to their sense of self and identity?

Working in an industry where age and appearance is your currency throws your self-esteem out of whack. If you only feel as important and worthwhile as the number of likes on social media, the number of ratings on your network or the amount of fan mail complimenting your appearance you receive, at some stage you will come unstuck. Most of the women I know in the media are also exceptionally intelligent and savvy women. Valuing what you do over your age or the dress you’re wearing is vital but so very difficult to sustain. Television is a visual medium and unfortunately, we have a curated and reduced idea of what is aesthetically desirable. I believe this is changing.

I adored all the diversity in this novel, hearing voices we don’t often hear in literature and media. Were any of these characters a challenge to write, and what did you do to create the authenticity in them?

To be honest quite a few of them are permutations of people I know or know of, it always morphs into something and someone else during the creative process… and I think the author is present in every character. There were times when Olivia was difficult because in some ways she’s like me. The naughty poorly behaved characters were a lot of fun! Atticus became a different character to who I originally planned him to be. I believe there’s a bit of magic that goes on when you write and if you listen carefully the characters reveal themselves to you.

Based on this, how could other writers approach it when they are writing about similar characters?

Listen to your characters, work out who they are and what they want, find their individual speech patterns and rhythms… tune into them… and never judge them.

When you first wrote this novel, were you aware, or did you have any inkling about how prophetic it could be with the #TimesUp and the #MeToo movements that started in late 2017 following the Harvey Weinstein scandal and subsequent fall out?

I began this story, as a pilot script in 2010 so no, I had absolutely no idea. I had completed the first draft before the Weinstein story broke. I think it’s something that’s been bubbling away for years (well clearly by the stories coming forward). I was also aware of it due to my own experiences.

I did like the little nod and reference to the main character in the Song of Us – did you plan on linking the books in any way or was this just happy coincidence? (It did make me smile and chuckle, it felt very meta).

I like to have a few links because our worlds are always interconnected, and I like my readers to know the other characters they’ve invested in my other books are still going strong. There’s also a nod to my first novel, in that Olivia and Dave have dinner at Fortune. Hugo was also in the first novel.

Olivia’s achievements at the end of the book, and her coming together with her friends, family and everyone who saw her through and supported her was a lovely ending. Do you think many cases of sexual harassment brought against those in the media will have an outcome like this, or will we just see more coming out all the time, with more people trying to hush things up or make excuses?

I believe this is a watershed time and there is no going back. I truly hope the women brave enough to come forward and speak out and the men and women who support them will all have their own happy ever afters. I also believe the paradigm shift in the psyche of the media and western society, will enable potential bullies and abusers to see the light and come from a place of respect and integrity…. I am all for a happy ending, always.

J.D., Thank you for agreeing to be a guest on my blog, and thank you for writing fun yet thought provoking stories that people can relate to as well.

Great questions, thank you so much for having me! x

The Upside of Over by J.D. Barrett ($29.99), published by Hachette Australia.

5 thoughts on “Interview: J.D. Barrett on The Upside of Over”