Synopsis: From the internationally acclaimed bestselling author of Code Name Verity comes a stunning new story of pearls, love and murder – a mystery with all the suspense of an Agatha Christie and the intrigue of Downton Abbey.

Sixteen-year-old Julie Beaufort-Stuart is returning to her family’s ancestral home in Perthshire for one last summer. It is not an idyllic return to childhood. Her grandfather’s death has forced the sale of the house and estate and this will be a summer of goodbyes. Not least to the McEwen family – Highland travellers who have been part of the landscape for as long as anyone can remember – loved by the family, loathed by the authorities. Tensions are already high when a respected London archivist goes missing, presumed murdered. Suspicion quickly falls on the McEwens but Julie knows not one of them would do such a thing and is determined to prove everyone wrong. And then she notices the family’s treasure trove of pearls is missing.

This beautiful and evocative novel is the story of the irrepressible and unforgettable Julie, set in the year before the Second World War and the events of Code Name Verity. It is also a powerful portrayal of a community under pressure and one girl’s determination for justice.

The Pearl Thief is set in England in 1938, in the year that preceded the incoming storm of World War Two, preceding Hitler’s march across Europe, and it’s characters show no indication that they are aware of the impending threat to their lives. Julie is on her way home from boarding school – a final summer at her family’s ancestral home before it becomes a school On her way hoe, Julie is attacked, and a well known archivist from London goes missing, presumed dead. And it is the McEwen family, a family of Travellers, who become caught up in the mystery after taking care of Julie and getting her to hospital. When Julie notices the family pearls have gone missing, she tries to piece together the night she was attacked, and slowly, a mystery unfolds. Whilst the investigation surges on, even with a lack of evidence, the suspicious eye is cast over the McEwens, despite Julie’s protestations that they could not have done it, questioning the reasoning everyone has. Amidst all this, the treasure trove of Murray pearls has gone missing, and Julie is determined to find it, and together with her brother, Jamie, and the McEwens, she strives to solve the theft – and a murder, with results that are as surprising as the rest of the novel.

For Julie, it is a final childhood summer, where she can relive the good memories and make some new ones, but at the same time, new discoveries about her mother and the McEwens, and her interactions with Ellen and her brother, have Julie questioning what she knows about herself and her feelings, but the world that she has known in comparison to Ellen’s world, and what they learn from each other through their new-found friendship. Like any friends, they had their disagreements on things and it took them a while to see that what something meant to Ellen, meant something different to Julie and vice versa, encapsulating the formation of an unexpected friendship between the two girls.

There are moments when the novel does not dwell on the mystery of the missing pearls and murder of the archivist, but rather, on the formation of the relationships between Julie and the Travellers, and how this begins to affect her and how she sees herself and the world. This character development ensures a solid grounding for the story, and even though the mystery was intriguing, it was nice to see the realistic approach that didn’t involve the obsessive nature and drive to solve the mystery, but rather, a nice balance between getting the characters and plot right to get from beginning to end, and allowing the characters to overcome hurdles and distractions, but ultimately, solving a mystery that had a very unexpected outcome, and an enjoyable journey to get there as a reader.

The Pearl Thief is marketed towards the children’s and Young Adult market, but I still enjoyed it and the setting that seemed to sing from every page – the Scottish landscape, and the speech of the characters cemented the time and place effectively. A great novel for anyone who likes mysteries, adventure and intriguing characters. 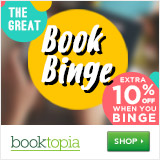