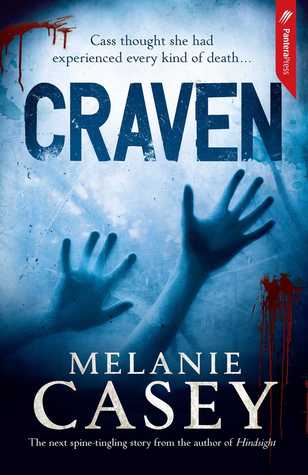 Moving to the city, Cass Lehman hoped to leave her recent notoriety behind her. Her ability to experience the final moments of a violent death helped the local police capture a serial killer, but also meant she was almost his first victim…

With a place of her own and a new job, things are looking up for Cass. But just as she starts to feel settled, Cass is targeted by a deranged stalker.

Are the personal attacks linked to a string of unsettling deaths that have left the police stumped?

Her gift is called on yet again by the one man she vowed she would never contact. Cass and police Detective Ed Dyson are thrown back into each other’s lives but can they overcome their feelings to put an end to the terror?

Will her experiences of death reveal the mind of the killer… or is there no such thing as a happy ending?

Picking up a year after where the devastating and traumatic events for both Cass and Ed left us in Hindsight, Craven brings a new world of threats to Cass and those she cares about. Things start out innocently enough in Adelaide with Cass house hunting. Though a vision of a death in one house, foreshadowed in the prologue, counts that house out. An effective way to bring Casey’s fans back into the fold, and reintroducing us to Cass and her gift, was the vision she had about the death that had taken place there. I would have liked to have known more about that victim and the case, but it served its purpose in the context of the novel and plot that was to follow.
Also in Adelaide, is Detective Ed Dyson, her former boyfriend and the police officer she assisted in the Fleurieu Killer case back in Jewel Bay twelve months ago, working with a new partner, in the Major Crime Investigative Branch, or MCIB, on a twelve-month secondment. When her car is vandalised, Cass calls Ed for help, spurring on a series of events that continue to throw them together, along with Dave, Ed’s new partner, and the only person Cass has been able to confide in since her move to Adelaide, Claire. Along with investigating his serial killer, Ed is thrown back into Cass’s life, trying to protect her from a stalker, yet little do they both know the danger hiding in the shadows that will befall them in the closing chapters of the novel.
Again, Casey has had me on the edge of my seat, with many sleepless nights out of a desire to find out what happens next and fear of the serial killer. I feel this fear is what makes her novels exceptionally well written, because I definitely felt the fear Cass felt. I felt her sleeplessness and I also felt her uncertainty about things. There were moments of sadness though, and moments where I wanted to shake some of the characters into thinking sense – again, this is why I loved this book, because the characters were so believable. They weren’t just black and white, they had grey areas and were flawed: nobody is perfect. Cass and Ed illustrate this in a wonderful way. I am looking forward to reading future Cass Lehman books, and I recommend the series to crime lovers anywhere.