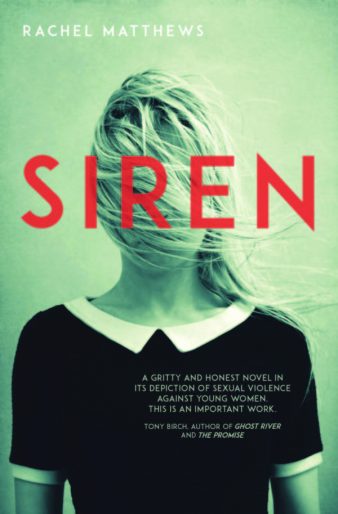 Synopsis: A brave new novel that sensitively explores one woman’s experience of sexual violence and the silencing of those who feel compelled to speak out.

What happens when a young woman enters a city apartment early morning, with two footballers? Jordi Spence is sixteen years old and lives in outer Melbourne. By daybreak, her world has shifted. Max Carlisle, a troubled AFL star, can’t stop what comes next. And Ruby, a single woman from the apartment block, is left with questions when she sees Jordi leave.

In this remarkable novel, Rachel Matthews captures the characters of Jordi and her family, the players, and the often loveable inhabitants of a big city with a deceptive lightness of touch that seduces the reader. Siren reveals the often unnoticed life of a city while simultaneously drawing us deep into a dark and troubling world. What happens has an unexpected effect on all those who are both directly and indirectly involved.

The result is a powerful and haunting novel about cultural stereotypes and expectations, love, loneliness, family and our struggle to connect. In so many ways, Matthews subtly sounds the siren on sexual violence and its prevalence in our culture.

It is rare to come across a novel that tackles concepts and issues that are rarely brought into the light, unless it becomes a major story that hits the news. In Siren, Rachel Matthews tells the story of Jordi, a teenager victimised by an AFL star, who would have all the power of a club and community behind him, and the privilege of money and standing in society that can and is, in some instances, used to silence victims and those without power and influence. Where the AFL player in question would have had the best defence he could afford, Jordi is silenced, alone, and feeling like she can’t turn to anyone, not even her mother. The witnesses are silenced too: the roommate of the AFL player, Max Carlisle, who knows what happened, and is consumed by fear, and torn between the desire to do the right thing, and the idea that he needs to protect the brand of the AFL, and ensure that nothing tarnishes it, even when a crime has been committed. And Ruby, the single woman in the same apartment building, who will encourage Max to speak out, or to try to, is caught up in this web of silence as well.

It is a web of silence that affects everyone, except the perpetrator, and it is this culture of silence and exploitation that forms the basis of the novel, complementing Jordi’s struggle, which is front and centre. It examines the culture of blaming the victim and questioning their role in the violence, whether it is sexual or domestic. By placing the story of Jordi front and centre, and showing how powerless even those who are in positions where they might be listened to are as well, Siren eloquently relates the gritty reality of sexual violence against young women. It has a sense of discomfort throughout the novel, because as a reader, you know Jordi is the victim and isn’t to blame, the doctor at the clinic urging her to report knows, and the witnesses know, and yet, everyone who can help, is unable to without Jordi saying so, or because they feel silenced by the community they are a part of.

Told in third person and moving between the perspective of Jordi and those who were unwitting witnesses, including the homeless woman Max befriended, whose concern for Jordi and finding out what had happened to her over her own health and living situation. Jordi’s home life isn’t perfect, with her father off all the time, and her mother’s current boyfriend isn’t great, and even her mother isn’t always there for her, but begins to change her tune, casting the boyfriend aside when she realises Jordi is struggling and does everything she can to get her daughter to open up, but is also afraid to speak out, to say what she fears has happened out loud. Jordi is ashamed, and doesn’t want anyone to know, but she feels like she is drowning, and the witnesses who feel compelled to speak out are equally silenced by their own fears and doubts, or by those of those around them, and the threats they might face – whether from those they know or the community at large, and the desire to bury the issues of domestic and sexual assault and violence behind closed doors, because there are those who would rather not acknowledge it.

The culture of silence is depicted cleverly through the actions of each character, and the way they think and respond. It is shown through the decisions Jordi makes and about who she tells and doesn’t tell, about what she does and doesn’t do and about the assumptions made towards the end of the novel, and the sense that I got whilst reading it that things could go wrong and might not be resolved.

Dealing with uncomfortable issues in literature is a good way to get attention on these issues, and out into the broader community. Sometimes media stories don’t give the full impact and only tell part of the story, or tell a narrative they want to. In a book, many facets can combine to show various sides of the story, but at the same time, illustrate that the privileged notion of victim blaming and being able to get away with something due to power and money – I felt this was what Rachel Matthews was suggesting in the story – can be shattered and broken down, and therefore discussed and ideas surrounding sexual and domestic violence that appear to put the responsibility on the victim can begin to be broken down.

It is not an easy read by any stretch of the imagination and I don’t think it is meant to be easy and light. It is meant to be dark, and gritty and confrontational. Not only is the reader confronted by sexual assault and domestic violence, but by homelessness, and class divide, and the assumptions people make based on these characteristics and others, without getting the full story. It does not sanitise any of these experiences either, and combined, these make it an important book to read, even if you only read it once, it is a story that will stay with you, niggling at the back of your mind whenever these stories come up in the media. Rachel Matthews acknowledges these issues and writes about them in an in-your-face style that ensures the reader is unlikely to forget too quickly.

A powerful story that needs to be told, and is told without any sugar coating of the issues.