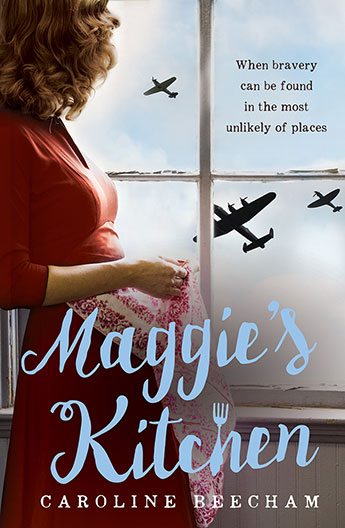 I received a copy from the publisher for review

Synopsis: They might all travel the same scarred and shattered streets on their way to work, but once they entered Maggie’s Kitchen, it was somehow as if the rest of the world didn’t exist.

When the Ministry of Food urgently calls for the opening of British Restaurants to feed tired and hungry Londoners during World War II, Maggie Johnson is close to realising a long-held dream.

But after struggling through government red tape and triumphantly opening its doors, Maggie’s Kitchen soon encounters a most unexpected problem. Her restaurant has become so popular with London’s exhausted workers, that Maggie simply can’t get enough supplies to keep up with demand for food, without breaking some of the rules.

With the support of locals, and the help of twelve-year-old Robbie, a street urchin, and Janek, a Polish refugee dreaming of returning to his native land, the resourceful Maggie evades the first threats of closure from the Ministry. As she fights to keep her beloved Kitchen open, Maggie also tries desperately to reunite Robbie with his missing father as well as manage her own family’s expectations. Until she can no longer ignore the unacknowledged hopes of her own heart, and the discovery that some secrets have the power to change everything.

Maggie’s Kitchen, another book set during World War Two, but this time in London, during the Blitz, tells the story of Maggie Johnson and her British Restaurant venture. As Maggie struggles with the conflict of following her dreams in the wake of personal devastation, it is following her heart and doing something to help the nation in a time of war. Though she is beset by a magnitude of problems related to getting the supplies she is supposed to receive, Maggie uses her initiative to find a way to boost her supplies, even if it means breaking some rules to do so.

Maggie is joined in her venture by a few friends from her former workplace, Tom, who is now in need of work following a tragic workplace accident, Janek, a Polish refugee who seems to have a secret that causes suspicion amongst some of the girls, and Robbie, a twelve year old boy searching for his father. Together, the manage to bolster the meagre supplies sent from the Ministry of Food and offer people a meal that has them lining up for more, and having to close early.

Through her fight to keep her restaurant open, Maggie strives to reunite Robbie with the family he should be with, and tries to please her family and help them: a situation that could backfire when her attempts to not only please her family but also let them know she cannot control a situation – the combination of all these conflicts against the backdrop of the war illustrates how every day people in London dealt with the war and what they might have gone through. When reading this book, I found I didn’t want to put it down, because it told a story about the home front of the war in London I had not been aware of before. The flow of the story works well, and it draws you in and pulls you along for the ride.

At the end of the book, the recipes Maggie used throughout are included for readers to try, and they would be interesting to compare with what we make today and our modern methods.

Another fantastic read set against the backdrop of war.