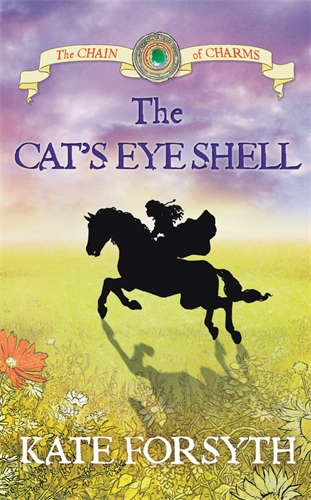 Once there was a gypsy queen who wore on her wrist a chain of six lucky charms – a golden crown, a silver horse, a butterfly caught in amber, a cat’s eye shell, a bolt of lightning forged from the heart of a falling star, and the flower of the rue plant, herb of grace. The queen gave each of her six children one of the charms as their lucky talisman, but ever since the chain of charms was broken, the gypsies had been dogged with misfortune.
The Cat’s Eye Shell – Book 4, 20-24th August 1658

Having acquired the first three charms in the quest to secure their family’s freedom, Luka and Emilia flee into Sussex with soldiers hot on their heels, in company with a Royalist duke, a Catholic priest, a highwayman and young Tom Whitehorse. Only the Catholic underground can help them all escape – but this is a most dangerous religion in the time of Puritan rule. And Emilia and Luka still must find the elusive gypsy tribe of the cat’s eye shell, who, it seems, have turned to smuggling…

As Emilia and Luka travel towards Sussex with the duke, priest, highwayman and Tom from book three, they venture into territory of the Catholic Underground in their search for the elusive gypsy tribe that holds the cat’s eye shell charm – though nobody is certain where to find them or indeed, if they will find them. But there are people threatening to stand in their ay, and despite the Catholic Underground taking them to safety, they must lie low during the Sabbath – everyone must – to avoid suspicion and stay out of the prisons and away from the gallows. But as they hide with Lady Mary and her family, Emilia and Luka are unsettled – they suspect someone is betraying their group. Whilst at Lady Mary’s they meet Milosh, a fellow Rom and the elusive owner of the cat’s eye shell they have been looking for. Caught up in the charms, saving their family and a growing plot to overthrow Cromwell, Emilia and Luka must find a way to negotiate with Milosh for his charm – and when they find out who he is helping, they are shocked – he has turned to smuggling – and helping the Catholics against the Puritan rule, for it is dangerous to be Catholic or Rom in these times.

The fourth book in the series shows the intersection of two persecuted groups and the sacrifices they made, and the risks they put themselves in during Cromwell’s time. In a time when many people would have turned Emilia and Luka away, Lady Mary and her family the Royalist Duke, Catholic Priest, highwayman and Tom Whitehorse are there to help them – or at least accompany them for safety as far as possible. For these people, the goal is to restore King Charles II to the throne and put an end to the Lord Protector.  For Emilia and Luka, who rules is of no consequence as long as they can free their family and live their lives of music and travel – and it is perhaps here where the other characters begin to understand, or they at least have a mutual understanding that helping each other will be the best for all.

Now over the half-way point with this series, the tension is growing, as the deadline for Emilia and Luka’s quest to save their family draws closer and closer. The fear they have at losing all that is precious to them rests on this quest and getting help from the Hearne tribe to save their family. But it also rests on Emilia’s insistence that the charms have a magic quality about them that once reunited, will save their family and all Rom. It is here where the conflicting emotions and feelings Luka has towards his cousin’s approach comes out again – and the climatic ending of the novel leaves them with four charms, and an ally in Milosh, who will help them towards their next goal and charm in Sussex with the Smith tribe, and the charm shaped like a lightning bolt.

This series gets better with each book, and as Emilia and Luka move towards London and their final destination, whilst the focus is on them, the story occasionally shifts to the jail that Cromwell’s men are holding their family in, and shows the reality of what they are going through as Emilia and Luka are on their quest – truly tugging at the heart strings and having me hoping that Emilia and Luka will be successful, which will become clear when I finish the series.

Another excellent story from Kate Forsyth.