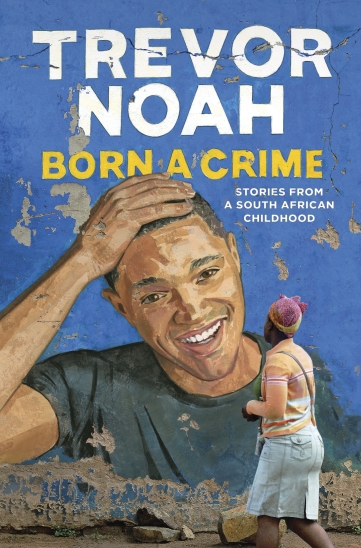 Title: Born a Crime: Stories from A South African Childhood

Synopsis: Growing up mixed race in South Africa, this is the fascinating and darkly funny memoir from Trevor Noah.

Trevor Noah is the host of The Daily Show with Trevor Noah, where he gleefully provides America with its nightly dose of serrated satire. He is a light-footed but cutting observer of the relentless absurdities of politics, nationalism and race — and in particular the craziness of his own young life, which he’s lived at the intersections of culture and history.

In his first book, Noah tells his coming of age story with his larger-than-life mother during the last gasps of apartheid-era South Africa and the turbulent years that followed. Noah was born illegal — the son of a white, Dutch father and a black Xhosa mother, who had to pretend to be his nanny or his father’s servant in the brief moments when the family came together. His brilliantly eccentric mother loomed over his life — a comically zealous Christian (they went to church six days a week and three times on Sunday), a savvy hustler who kept food on their table during rough times, and an aggressively involved, if often seriously misguided, parent who set Noah on his bumpy path to stardom.

The stories Noah tells are sometimes dark, occasionally bizarre, frequently tender, and always hilarious — whether he’s subsisting on caterpillars during months of extreme poverty or making comically pitiful attempts at teenage romance in a colour-obsessed world; whether he’s being thrown into jail as the hapless fall guy for a crime he didn’t commit or being thrown by his mother from a speeding car driven by murderous gangsters.

Trevor Noah’s biography, Born A Crime, finds a way to deal with apartheid South Africa and growing up during this time and the turbulent years that followed in a moving, humourous and effective way. Growing up in a world where your very existence is considered a crime because your mother, a Xhosa woman, had relations with a white Swiss man at the height of apartheid can shape you. Using his comedic skills, Noah manages to convey the hatred and segregation, and struggles of the era to an audience who may not be quite familiar with it. We know it happened, we know how bad it is – but how many of us who didn’t live there at the time or who haven’t spoken to people who lived through it know how truly bad it was? Noah’s ability to tell the story through the eyes of a child who did not quite understand at first how his existence was breaking the law, and the innocence of these days illustrated how some people may have tried to deal with it – protect your children, yet they will still become aware of the harsh realities surrounding their lives.

Trevor Noah has told a side of apartheid that may not have been possible to tell in the early nineties, so soon after it ended. As he is mixed race, Trevor Noah was able to move between the groups at school: speaking various African tribal languages, English and some Afrikaans, his ability to be a chameleon in a world where colour was given a lot of attention was something he soon found he could use to his advantage. In writing this memoir, he has invited fans of his comedy and other readers into a world that had humour, love and some moments of pure terror and fear, and the confusion that some people had, not knowing how to deal with a boy who could speak at least seven languages and who wasn’t quite white, but wasn’t quite black. Like all of us, these experiences growing up in the final years of apartheid and in the years following, where people who were still products of apartheid weren’t always sure of what to do, have shaped Trevor. His words can affect everyone. Though he is a comedian, his words are strong, and could encourage unity and working together, showing the ineffectiveness of dividing people up based on race or skin colour. Further division came in the category of black based on whether you were Xhosa, Tswana, Zulu or a member of another tribe or cultural group, and this could determine how you acted within this group according to your gender. Apartheid not only set race against race, but sometimes set people who had been classed as one race against each other.

Reading this book was eye opening – I knew how bad it was from my parents, and that’s why they left, so I wouldn’t grow up exposed to any of the impacts of apartheid, because it could affect everyone adversely, as Noah pointed out. Though some groups gained more privileges than others, the fact that these could be taken away with what Noah describes as the slash of a pen and the whim of the person wielding it, likely instilled fear in many. Noah’s world as the child of a black woman and a white man, a mixed race child, in a world that didn’t accept him or always know what to do with him, is one that not many of us will really know, yet through his words, we can visit and find out what it was like – mainly for him, but also, the world seen through his eyes as to how anyone and everyone could be affected by apartheid is just as powerful. The limitations of what people could do for work were determined by race.

A great read for anyone who lived through apartheid, or who wishes to know more. Trevor Noah shows that people have the ability to become more than what society tells them they are, that yes you may struggle and fight, you may face adversity but in the end, you can get there.

1 thought on “Born A Crime: Stories from A South African Childhood by Trevor Noah”